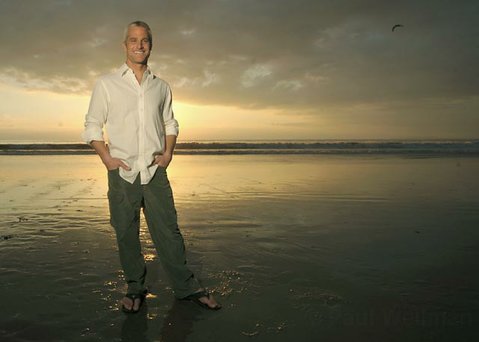 CROSSINGS by Michael Kew, Michael is a graduate of Humboldt State University and a long time surf travel scribe:
Your book is a travelogue that includes your experiences on the road traveling the world in search of waves and finding new cultures.
Is that a fair summation? Or would you characterize Crossings in a different way?
I read online that you receive an “F” in Journalism, explain?
Where haven’t you been?
How many surf trips have you been on?
You’ve experienced your fair share of perfect waves? How many times have you been skunked how many times have you scored? What is the ratio?
The closest near death experience abroad?
Should the media adopt a ‘don’t name it’ policy; just stop naming spots? No matter what. Or is that bit archaic?
Do you have a position on pay-per-use surf camps?
What do you make of the Salina Cruz Association of Surfers and Lifesavers that are strongly suggesting that if you visit Salina Cruz waves, you must hire them as a guide?
Would you rather take an assignment from a US surf mag or an Australian surf mags?

EXCERPT FROM CROSSINGS by Michael Kew:

WOULD THEY DO IT IN PARIS?

It’s the second T-shirt I’ve seen today that poses this question, a lingering sting of animosity toward France’s three decades of nuclear testing in L’Archipel. France ignored a 1973 World Court request to stop the practice, sparking protest worldwide, including New Zealand’s delegation of a naval ship to the main atoll, and Peru’s severance of their French diplomatic relations.

Relentless global opposition to nuclear testing saw the French drilling bomb shafts beneath the lagoon in 1975. Rather than blasting motus in plain view, replete with ominous, “harmless” fallout, the endeavor cloaked the tests submarine.

[Above: Fletcher Chouinard on a virgin right-hander. Photo: Michael Kew]

In 1995 French president Jacques Chirac announced a fresh line of tests, igniting global protest. New Zealand and Chile yanked their ambassadors from Paris and heavy rioting ensued in Papeete, yet the French cast a blind eye to the opposition, lounging comfortably in Europe, light-years distant. France discontinued testing in 1996.

French authorities claim the tests pose no ecological threat, though in 1998, plutonium leakage was discovered in one lagoon, and France’s director of its Atomic Energy Commission admitted to the existence of cracks in the coral cones of two atolls. Still, French officials insist there is no cause for concern.

“If nuclear testing so safe,” a villager says to me, “why didn’t they do in their water?”

Motoring out of the pass late that afternoon, bound for the next atoll, another sort of explosion is viewed port side. Flawless 10-foot lefts detonating over shallow coral, fiery and backlit, seething mechanically, beckoning sadistically.

TOP 5 stories:
1) Gabe Medina wins NIKE Lowers Pro-
I hate to say it, because I’m a homer for the USA; but Gabriel Medina looked far better than most, in my opinion. 18 years old.
Kolohe? Apparently after losing his first heat, he had a meltdown and destroyed his board. Good, bad, indifferent?

2) The Boardroom International Surfboard Show takes over San Diego and the Del Mar Fairgrounds on Oct 6 & & of 2012 honoring MR in the icons of Foam shape-off.

3) Nathan Fletcher wins the Billabong XXL Ride of the Year, Best Tube and Overall Performance awards.
– Biggest Wave went to Garrett McNamara wave in Portugal that the judges put at 78′, 12-feet smaller than the 90-feet claim made by the winner.And just one foot larger than the previous world record of 77-feet held by Mike Parsons at Cortes Bank.
– Dave Wassel wins Monster Paddle at Jaws – which I think is the hardest award to win, takes the most Cojones.
4) The world’s best surfers are descending on Brazil’s Rio de Janeiro for the next stop on the 2012 ASP World Championship Tour season, the Billabong Rio Pro, to be held from May 9 – 20, 2012.
5) We are braodasting next Saturday night from the San Diego Surf Film Festival at Birds Surf Shed from 7-9pm Saturday may 12, that show will be broadcast next Sunday. Come out say hello, but more importantly watch the great surf films on offer at the San Diego Surf Film Festival.